From Mendocino County Comix #1 (1982), here’s a brief, cautionary version of “The Frog Prince” by Richard Corben:

— “The Making of Ragemoor” by Richard Corben — 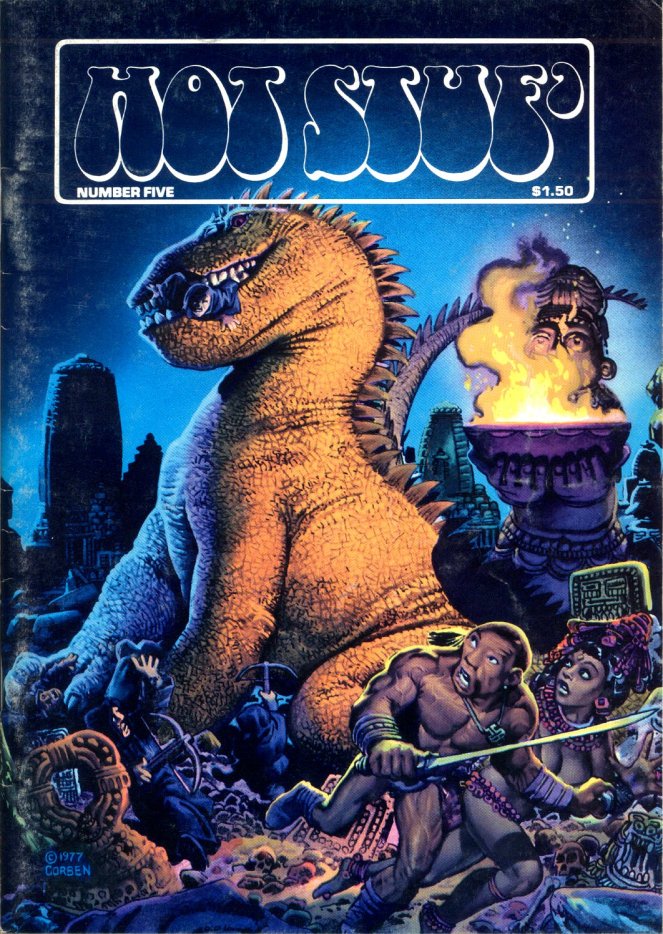 It’s not every day that a dino-lizard-monster rises out of the earth and attacks… not in my neck of the woods, anyway…

This morning RCN is pleased to present, for your viewing enjoyment and art-historical education, the posters for the movies Phantom of the Paradise, Heavy Metal, and Spookies, with art by Richard Corben:

Anyone know if Corben produced the art for any movie posters other than the three featured above?

I don’t recall any others myself, but I’m no expert…

See the comments section for an explanation of why I’ve added these two images:

Just one other thing: please don’t try to order from that old advertisement.

Bad for Good has attractive but flawed cover art by Corben, but Jim Steinman ought to have given these songs to Meat Loaf to sing, back when Meat Loaf could still bellow like a bull and shriek like a bat out of hell…

Pity about the typographical onslaught at the bottom of both the LP and the CD covers. Clearly, somebody — the record company, Steinman himself — didn’t trust that record buyers would notice the “Bad for Good” tattoo on the forearm of Corben’s winged rock god… or read the back cover… or read the labels centred on both sides of the LP… or, well, you get the idea…

Available in North American comic shops tomorrow, Dark Horse Presents #9 will include Corben’s adaptation of Edgar Allan Poe’s “The City in the Sea”:

And coming in April, Creepy Comics #8 will have a cover with art by Corben:

“The City in the Sea”
By Edgar Allan Poe

LO! Death has reared himself a throne
In a strange city lying alone
Far down within the dim West,
Where the good and the bad and the worst and the best
Have gone to their eternal rest.
There shrines and palaces and towers
(Time-eaten towers that tremble not)
Resemble nothing that is ours.
Around, by lifting winds forgot,
Resignedly beneath the sky
The melancholy waters lie.

No rays from the holy heaven come down
On the long night-time of that town;
But light from out the lurid sea
Streams up the turrets silently,
Gleams up the pinnacles far and free:
Up domes, up spires, up kingly halls,
Up fanes, up Babylon-like walls,
Up shadowy long-forgotten bowers
Of sculptured ivy and stone flowers,
Up many and many a marvellous shrine
Whose wreathëd friezes intertwine
The viol, the violet, and the vine.

Resignedly beneath the sky
The melancholy waters lie.
So blend the turrets and shadows there
That all seem pendulous in air,
While from a proud tower in the town
Death looks gigantically down.

There open fanes and gaping graves
Yawn level with the luminous waves;
But not the riches there that lie
In each idol’s diamond eye,–
Not the gayly-jewelled dead,
Tempt the waters from their bed;
For no ripples curl, alas,
Along that wilderness of glass;
No swellings tell that winds may be
Upon some far-off happier sea;
No heavings hint that winds have been
On seas less hideously serene!

But lo, a stir is in the air!
The wave–there is a movement there!
As if the towers had thrust aside,
In slightly sinking, the dull tide;
As if their tops had feebly given
A void within the filmy Heaven!
The waves have now a redder glow,
The hours are breathing faint and low;
And when, amid no earthly moans,
Down, down that town shall settle hence,
Hell, rising from a thousand thrones,
Shall do it reverence.

From Realm #5 (October 1972), here’s “[Journey to] Gore’s Dungeon,” a short article in which cartoonist and fanzine publisher/editor Ed Romero describes a visit to Richard Corben’s home and studio “in the rolling hills of southern Kansas City, Missouri”; also in attendance was a young writer, Jan Strnad, who happened to be in the process of rounding up the stories and cover artwork for Fever Dreams #1:

Westfield Comics Blog has an interview with longtime friends and legendary comics collaborators, Jan Strnad and Richard Corben, about their forthcoming four-issue Dark Horse mini-series, Ragemoor, which the publisher describes as follows:

Ragemoor! A living castle, nurtured on pagan blood, harborer to deadly monsters! A fortress possessed of its own will and ability to change itself, with the power to add and destroy rooms and to grow without the help of any human hand. Its owner is mad with jealously, its servants aren’t human, and its secret’s horrific!

In other words, HEADS UP!

“I’ve had a long career in comics, doing it the way I wanted, mostly. I’m grateful for what success I’ve had. I still love the possibility of comics, as a medium to tell the stories I want to, not just the ones that sell big. I still have some goals to achieve and skills to develop so I don’t intend to retire ever. I’m going to continue doing comics until I drop.”
— Richard Corben in conversation, Westfield Comics Blog, January 2012

I’m a bit late with this one, but of course Corben fans will also want to pick up the Murky World one-shot, available in stores now from Dark Horse: