Whether or not you think that a big Frazetta and Burroughs fan like a young Jeffrey Catherine Jones might have been “inspired” by Frazetta’s title-page illustration for Burroughs’ Tarzan and the City of Gold, you surely must agree that Jones’s fan art is all kinds of wonky. Particularly egregious from a pure drawing standpoint is Jones’s botched handling of the perspective of the woman’s arms and the failure of construction that is her shrivelled right hand. Frazetta handles the same pose/angle/elements simply and with aplomb, and he is able to do so partly because he has made the throne large enough, or the woman small enough, to give himself room to operate. In particular, notice that the cylindrical forms of both of the woman’s arms are reinforced by the curves of the wrist and upper arm bands — Jones does this on one wrist, and it’s effective — and the spaces between the large, swooping arms of the throne and the outstretched arms of Frazetta’s woman effectively, along with the subtle dimensional edges of the throne and a bit of tone, push the back of the throne back in space, so that the pose is believable. In fact, as an overall strategy here, Frazetta maintains a strict contrast between the open, unrendered figure and the very simply shaded/rendered elements that surround her. Jones, on the other hand, fills the spaces between the woman’s arms and her body with black ink, and makes the woman too large for the throne, so that the arms have no space to extend toward the viewer and rest on the arms of the throne in a natural way. What Jones does not seem to realize at this point is that no amount of deep shadow and scratchy rendering can solve bad figure construction.

There are other problems with Jones’s illustration, of course, but I’m just gonna leave it there.

Anyone who has delved into the archive of this site will know that I am a huge admirer of Jones’s work, but what this illustration shows is that everyone has to start somewhere, and that that somewhere is often far distant from where one ends up. In other words, and in short, there’s hope for us all, if only we will do the work.

More cover scans today, all of paperbacks in my personal library:

Keywords: Lost on Venus, Beyond the Farthest Star, The Outlaw of Torn by Edgar Rice Burroughs; Frank Frazetta.

My books. My scans. You’re welcome.

I scanned the cover of Back to the Stone Age by Edgar Rice Burroughs, with pulse-poundin’ art by Frank Frazetta, from the copy of the paperback edition in my personal library.

Suydam’s stories in Heavy Metal and Epic Illustrated were among the best those magazines had to offer.

Frazetta, of course, is Frazetta.

Perhaps those “Bonus Images” ought to have been a “Connections” post all on their own.

Coming in September from IDW:

From the press release:

San Diego, CA (May 18, 2012) – Joe Kubert is one of the most lauded artists in the history of comics, a true living legend. He has been a vital creative force since the 1940s and remains so to this day. He has had defining runs on Hawkman, Enemy Ace, Tor, Sgt. Rock, and many others. Among his career highlights is Tarzan of the Apes, and Kubert’s rendition could arguably be called the definitive comic adaptation of the Ape-man.

“To have the Tarzan stories I drew commemorate the 100th anniversary of a strip I fell in love with as a kid is the thrill of a lifetime,” said Joe Kubert, writer and artist of all the stories in this Artist’s Edition.

This Artist’s Edition collects six complete Kubert Tarzan adventures, including the classic four-part origin story. Each page is vividly reproduced from the original art and presented as no comics readers have seen before. For fans of Kubert and Tarzan, this new entry in the Eisner-winning Artist’s Edition line must be seen to be believed!

2012 is the centennial year for Tarzan. Created by master storyteller Edgar Rice Burroughs, Tarzan is instantly recognizable to countless fans around the globe. Other notable creations of Burroughs include John Carter of Mars, Korak, Carson of Venus, and At the Earth’s Core.

“I first read these comics when I was 10 years old, and they remain some of my favorite stories ever,” said Editor Scott Dunbier, “this is Joe Kubert at his absolute best.”

What is an Artist’s Edition? Artist’s Editions are printed the same size as the original art. While appearing to be in black & white, each page has been scanned in COLOR to mimic as closely as possible the experience of viewing the actual original art—for example, you are able to clearly see paste-overs, blue pencils in the art, editorial notes, and art corrections. Each page is printed the same size as drawn, and the paper selected is as close as possible to the original art board.

Of all the Artist’s Editions IDW has released so far, Joe Kubert’s Tarzan of the Apes is the one that I MOST want to own. When the book is available for pre-order, I’ll be there, credit card in hand.

From my collection, here’s another paperback with cover art by Frank Frazetta that I doubt many people have seen or remember: 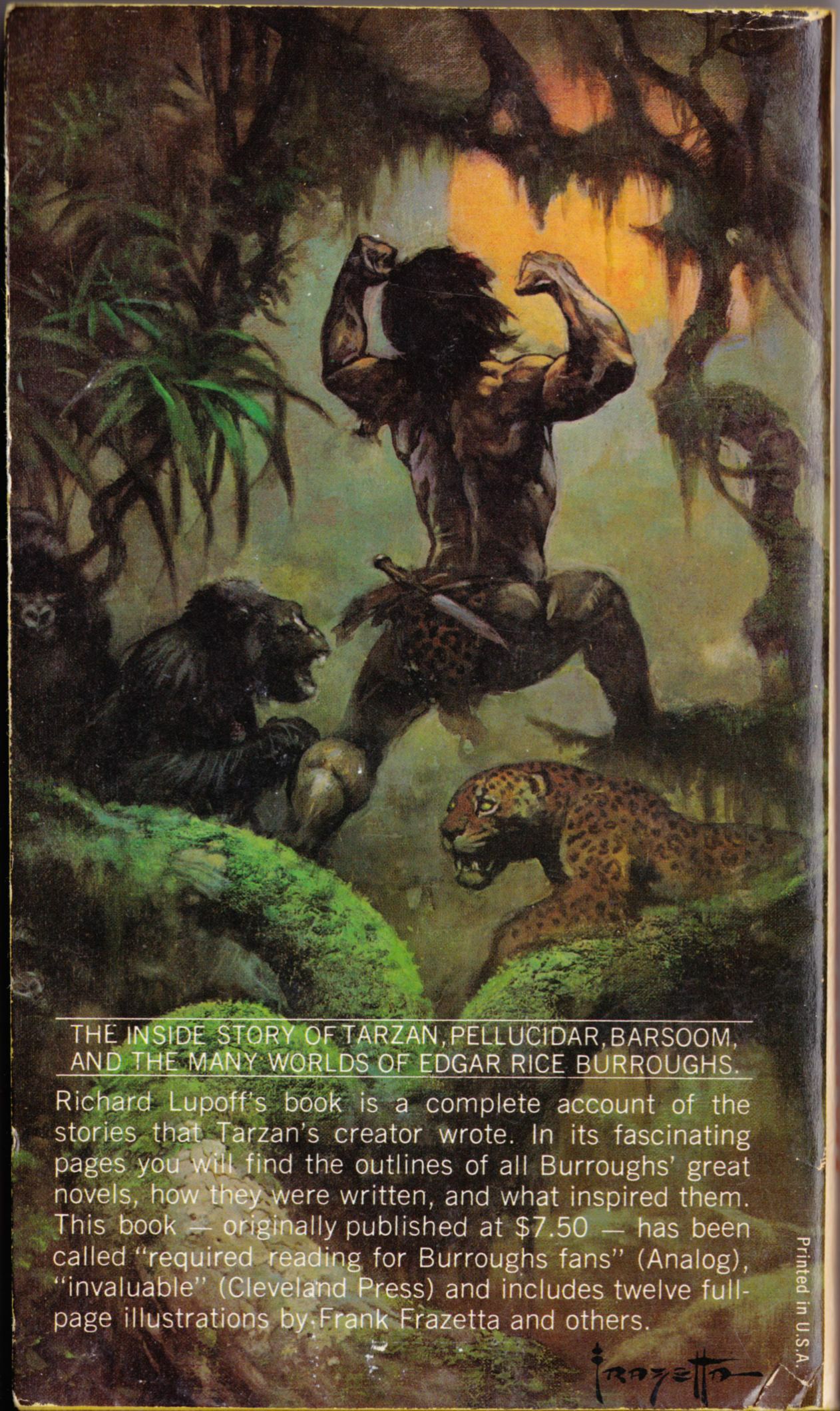 Covers like that one show that even Frazetta, mighty Frazetta, didn’t only hit home runs when he was at bat.

From the paperback collection of yours truly, here are two covers, freshly scanned:

Seems the designers at Ace couldn’t decide whether Ace’s 1970s reprint series of Edgar Rice Burroughs novels looked better with the art wrapped around to decorate the spine (as pictured above) or with coloured type on a white background (not pictured). No doubt, there was a lot of annoying input from marketing about which design would be more attractive on the store shelves and ultimately produce better sales…

The more elaborate Carson of Venus design is the odd man out here, I know, but since it is the last Edgar Rice Burroughs paperback with cover art by Frazetta that I have on hand, I thought I might as well throw it in as a bonus!

Keywords: The Mad King, Pellucidar, The Oakdale Affair, The Land of Hidden Men, At the Earth’s Core, Carson of Venus.

These are the only two “Ace Science Fiction Classic” paperbacks with cover art by Roy Krenkel that I own, so enjoy!

Frazetta’s Krenkel-influenced Edgar Rice Burroughs covers will be familiar to many, but his Maza of the Moon cover is somewhat less well known, mainly because the book’s author, Otis Adelbert Kline, never achieved any lasting popularity:

If Otis Adelbert Kline is known for anything, it is not the quality of his writing but the way he promoted his highly derivative adventure stories by surreptitiously circulating a rumour, reported in the fan press but later debunked, of a feud between himself and the pulp-fiction juggernaut he most closely styled himself after, Edgar Rice Burroughs.

Next up: more Jones covers!

Keywords: Carson of Venus, Lost on Venus, Maza of the Moon.