I recently built a plywood cabinet that is two-feet deep by three-feet wide by four-feet high, with five adjustable middle shelves and one non-adjustable bottom shelf, as a central location to store original artwork, limited-edition portfolios, a couple of massive art books, full sheets of watercolour paper, etc., which means I am now able easily to shuffle through our collection for items to scan and display here at RCN.

First up is a page of original art by John Buscema from issue #10 of Conan the Savage, a short-lived, black-and-white Conan spin-off series from the mid-1990s; the story is titled “The Necromancers of Na’at.” I bought the page for three main reasons: 1) I had long coveted a page with BOTH pencils and inks by John Buscema; 2) the pencils, inks, and China Marker tones here are ALL by John Buscema, and 3) the price was right. The fact that the page is signed by Buscema didn’t really enter into the equation, but it’s a nice bonus, I think.

To be perfectly frank, if I had had unlimited funds, this is not the page I would have selected. Instead, I would have snapped up a Conan the Barbarian page or three from one of those issues where Big John inked his own pencils without the additional China Marker shading. Unfortunately, such pages are prohibitively expensive for low-level collectors like me. So long ago I made up my mind to be happy with the best of what I could and can afford! 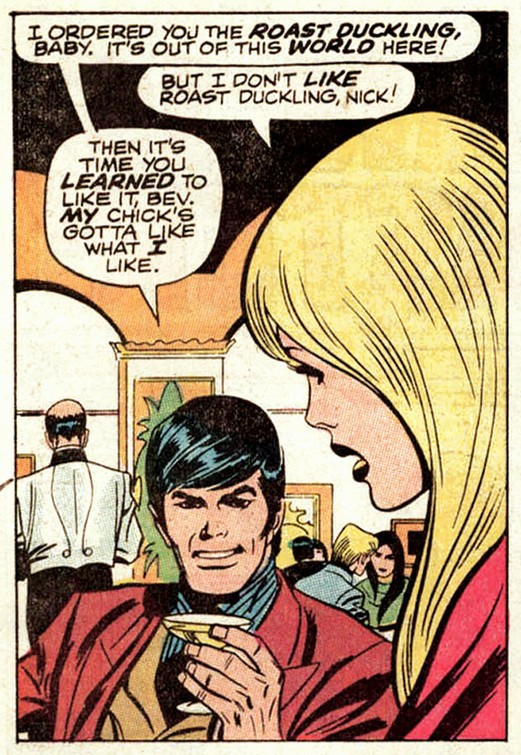 From our art collection, here’s small sheet — 8 1/2 x 11 inches — of moodily expressive pencil sketches by John Buscema that reveal a side of his artistic personality that has largely gone unnoticed by fans of his work in comics:

This afternoon, for your viewing pleasure (as promised!), I’ve got scans of the second group of five sketches by John Buscema that currently reside in our collection of original art:

I think my favourite out of the above group is the sketch of the swordfight; the little flicks of the pencil that define the contours of the forms are so confidently placed — amazing!

In case you missed it, the first group of five is right here.

From our modest collection of original art by various hands, here are five small sketches by John Buscema for you to peruse; if you click the images displayed below so as to enlarge them, you will find that the uploaded images are actually large enough to repay close study:

All five of the above sketches currently reside in a 12 x 12 inch, 3-ring scrapbook album in our living room. In case you’re wondering how they’re displayed, each sketch is attached to the centre of one side of an acid free sheet with acid free photo corners. Works for me.

I just posted a second batch of five sketches by John Buscema. I hope you enjoy seeing them!

Coming in July from IDW:

“John Buscema has been called one of the finest comic artists who ever put pen to paper. His work for Marvel Comics on The Avengers, Thor, The Fantastic Four, and Silver Surfer are all classics, highly regarded by fans from around the world. The same is true for his definitive rendition of Conan the Barbarian — Buscema breathed life into Robert E. Howard’s legendary creation in a manner that has rarely been rivaled. IDW is proud to announce the first American publication of John Buscema: Comics & Drawings, a special edition of the fine art catalog created for the most extensive exhibition of Buscema’s art ever staged. Weighing in at nearly 300-pages, this gorgeous hardcover book is a dream come true for fans of the visual mastery of John Buscema, an artist who’s ilk we are unlikely to see again.”

As excellent as his comics art was, especially when he inked his own work, John Buscema did not love to draw comics. He did, however, love to draw. Even after a full day’s work in the “Marvel Bullpen,” Busema’s idea of relaxation was to spend a few hours in the evening covering sketchbook sheets, copier paper, surplus comics boards, and even the backs of pages destined for reproduction, with sketches and studies that not only related to whatever work he had on his plate at the time but also served as an outlet for his personal obsessions — cowboys, horses, pirates, vikings, beautiful women, big cats, hand-to-hand combat, unusual character faces, etc., etc.

If you’re interested in Buscema’s sketches, three books have been published that, with varying degrees of success and failure, try to cover the territory: 1) The Art of John Buscema (1978), 2) John Buscema Sketchbook (Vanguard, 2001), and 3) John Buscema: A Life in Sketches (Pearl Press, 2008). I wish I could wholeheartedly endorse one of those books, but each has shortcomings in terms of design and/or reproduction that prevent me from doing so.

I suppose I might also mention that a four-page illustrated feature, “John Buscema: The Lost Drawings,” appeared in Heavy Metal Magazine in November 2011; by my count, the article includes reproductions — one large, the rest quite small — of a grand total of nineteen sketches.

No… in truth, the best place to view Buscema sketches is on the Web.

In our small collection of art by John Buscema, my wife and I have a couple of signed pages of pencilled and partially inked figure drawings on full sheets of sketchbook paper, ten signed sketches clipped by Buscema himself from larger sheets, an unusual signed graphite sketch on a sheet on copier paper, and a Conan page that the artist pencilled, inked, and shaded in what appears to be black grease pencil (a.k.a., china marker). So, obviously, somebody in our house is a bit of a Buscema fan!

For my next post, I plan to scan and share five of the small, signed sketches by Buscema in our collection, and I promise to follow that post up a bit later with another five.

From Conan the Barbarian Movie Special #1 (October 1982), here are four consecutive pages, with art both pencilled and inked by John Buscema, along with the original art for each page:

Unlike many of the inkers who were hired to embellish his pencils over the years, John Buscema never had a reputation as a gifted technician with a quill or a brush, though he did have an instantly recognizable style. His simple, vigorous brushstrokes could suggest fur and grass and hair realistically enough, but look carefully and you’ll see that very similar strokes also delineate musculature, armour, leather clothing, rocks, trees, shadows, etc., etc. Realistic details and textures were simply not Buscema’s strong suit. This was partly because the artist didn’t enjoy research — as he said in several interviews, one big reason he loved to work on Conan was because he could rely on his memory and imagination for everything — and partly because he viewed any “extra” time spent slaving over his comics work as money out of his pocket! But that’s not a bad thing, because what you do get when Buscema inks his own work is nothing less than an object lesson in basic form and gesture by a master draughtsman. And that’s more than enough.

What’s interesting to me about the above comparison is how much of John Buscema’s original composition for the cover of Conan the Barbarian #150 was cropped out of the printed version, presumably either by editor Larry Hama or by editor-in-chief Jim Shooter. Maybe if Buscema hadn’t shown Conan chopping a guy through the throat with his sword, the editors would have published it uncut. Maybe.

The only issues of Conan that I have ever searched through dusty back-issue boxes to find and add to my collection were issues in which Barry Smith inked Barry Smith, John Buscema inked John Buscema or Gil Kane inked Gil Kane. The unpublished cover of Conan the Barbarian #150 looks like pure John Buscema to me.

Here’s a youtube video that includes footage of John Buscema pencilling and then inking a pin-up of Captain America along with footage of Bill Sienkiewicz creating a quick portrait Electra with marker, brush and ink, and white-out: