I invented a technique —my system of color overlays —which apparently nobody can understand, but it’s really very simple. The luminescent quality of my color overlays is derived from the way I combine the colors. I shoot the photomechanical separations myself, to a slightly higher contrast than a normal photo engraver would do. This makes the colors appear brighter. I’m excited when I do finally see the colors. I can see if my ideas work well or not so well.”
—Richard Corben in conversation with Brad Balfour,
Heavy Metal #53 (August 1981)

Coming in December from Dynamite Entertainment:

Written by Robert Greenberger, The Art of Howard Chaykin will include a foreword by Brian Michael Bendis and an afterword by Walter Simonson. The product description at Amazon reads as follows:

Legendary for what he has done on the page and infamous for what he has said off it, Howard Chaykin ranks among the superstars of modern comics. In The Art of Howard Chaykin, go behind the scenes with the creator whose pioneering works include American Flagg! and Black Kiss, and experience the stories of his life as only he can tell them. Filled with no-holds-barred perspective from his longtime friends and colleagues, and featuring an extensive selection of artwork from throughout his career, including many never-before-published pieces from Chaykin’s own archives, The Art of Howard Chaykin takes readers on an in-depth journey from the 1970s to today with one of the medium’s great storytellers.

Although we won’t know until The Art of Howard Chaykin is published what work will be reprinted, here’s a gallery of the kind of work that MIGHT appear:

Actually, Howard Chaykin’s work has been in the spotlight a few times here at RCN. You can click here, for instance, to access a list of links to stories with art by Howard Chaykin and to read the story “Seven Moons’ Light Casts Complex Shadows” by Samuel R. Delany and Howard Chaykin, from Epic Illustrated #2 (June 1980). You can also click here to read “Gideon Faust” by Wein and Chaykin, from Star*Reach #5.

Keywords: The Art of Howard Chaykin, Weird Worlds Presents Iron-Wolf, The Scorpion, The Swords of Heaven, the Flowers of Hell, The Stars My Destination, Cody Starbuck, The Tomb of Dracula, American Flagg, Black Kiss.

Here’s yet another recent addition to our art collection; it’s a signed original page from the fourth issue of James Stokoe’s Orc Stain (July 2010). I’ve included a scan of the full-colour published version of the page for comparison. Sorry the bottom corner of my photo of the original art is a bit out of focus. I’ll try to do better next time.

Pages from James Stokoe’s Orc Stain can be purchased online from McConnell Art.

Here’s a JPEG of Jack Davis’s original artwork for “Cigar Store Indian, 1957” (with the note “HUMBUG #3” at the top), along with a scan of the piece as it was printed in Humbug #4:

What is immediately evident when one compares the two images above is how much detail was “lost in translation” from the original artwork to the printed page. In the original, Davis’s precisely crosshatched shadows are alive with atmosphere and reflected light. In the reproduction, however, the ink has sunk into the cheap paper to such an extent that Davis’s linework is made to appear a lot more heavy handed that it really is, with carefully designed tonal values congealing at the darker end of the scale into unintended masses of inky blackness. The loss of crucial detail is nowhere more obvious than on the plinth of the statue, which actually contains a lot more text — text that is integral to the joke that the drawing is intended to convey — than was visible to the readers of Humbug (see above), or even to the readers of the two-volume, slip-cased Humbug reconstruction that was published by Fantagraphics Books in 2009. However, unlike the fine folks at Fantagraphics, who clearly didn’t have the original artwork for “Cigar Store Indian, 1957,” on hand when they produced their magnificent tribute to the genius of Harvey Kurtzman and his co-conspirators at Humbug, Kurtzman and Davis would have been painfully aware what sort of damage the dodgy reproduction of Humbug #4 had inflicted on the gag on page three.

In an interview with Jeffrey H. Wasserman published in the fanzine Inside Comics #2 (Summer 1974), Kurtzman explained how Humbug came into being and why, in his view, the project was fatally flawed from the first:

KURTZMAN: HUMBUG was a very sentimental undertaking. We all sat around the day after TRUMP was dropped… wondering whether to slash our wrists. Arnold Roth was the only one who kept his head about him. I was sitting with Jack Davis and Al Jaffee and Harry Chester and Arnold was the only one who could think constructively. He went down and got some booze. And in our subsequent drunken state, we decided to carry on and we came out with HUMBUG.

WASSERMAN: TRUMP was a super-slick effort, obviously intended to be well-financed. But HUMBUG was different. It retailed for 15 cents and…

KURTZMAN: HUMBUG was an attempt to work with 15 cents and publish a sensitive cartoon satire magazine. It was a disaster because it wasn’t a realistic effort at all. It totally ignored fundamental business sense. We were carried away by our talent and camaraderie and went ahead with HUMBUG anyway. But I think we turned out some of the most charming stuff that’s ever been done. The format was just so bad. It was like a fart in the wind.

It was a teeny-tiny book in black and white. It had nothing going for it except talent — at least that’s what we told ourselves. We were satisfied with that, but it wasn’t nearly enough.

You can read the entire interview here.

From Conan the Barbarian Movie Special #1 (October 1982), here are four consecutive pages, with art both pencilled and inked by John Buscema, along with the original art for each page:

Unlike many of the inkers who were hired to embellish his pencils over the years, John Buscema never had a reputation as a gifted technician with a quill or a brush, though he did have an instantly recognizable style. His simple, vigorous brushstrokes could suggest fur and grass and hair realistically enough, but look carefully and you’ll see that very similar strokes also delineate musculature, armour, leather clothing, rocks, trees, shadows, etc., etc. Realistic details and textures were simply not Buscema’s strong suit. This was partly because the artist didn’t enjoy research — as he said in several interviews, one big reason he loved to work on Conan was because he could rely on his memory and imagination for everything — and partly because he viewed any “extra” time spent slaving over his comics work as money out of his pocket! But that’s not a bad thing, because what you do get when Buscema inks his own work is nothing less than an object lesson in basic form and gesture by a master draughtsman. And that’s more than enough.

From 1997, here’s Richard Corben’s original marker-on-vellum cover art for Aliens: Alchemy #1, along with scans of all three covers in the Alchemy mini-series: 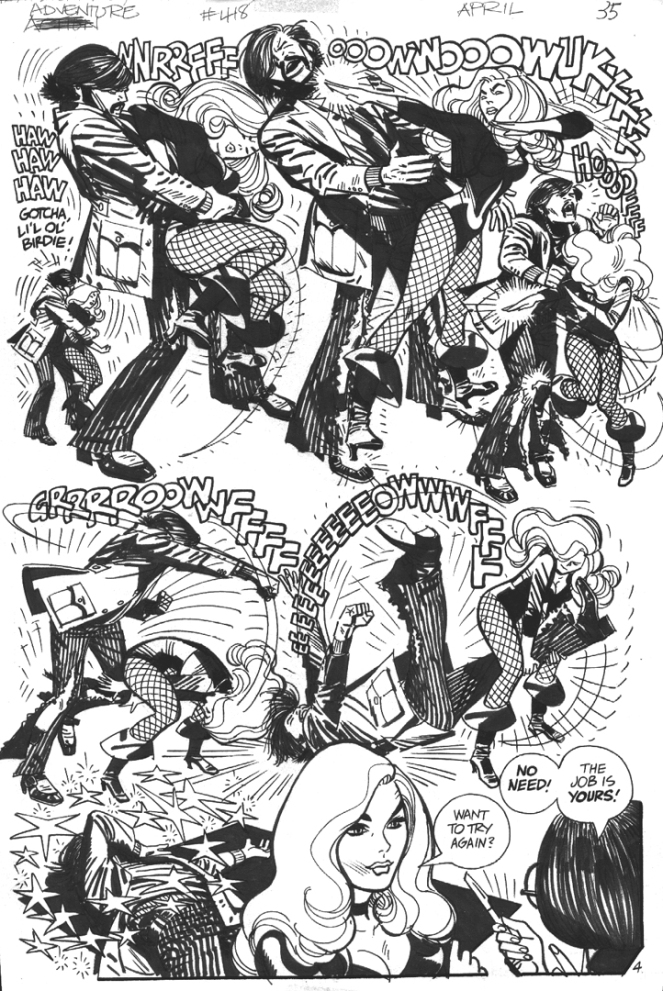 Man, that page looks so much better in black and white than it does in colour! Toth drawing Black Canary was a match made in heaven.

What’s interesting to me about the above comparison is how much of John Buscema’s original composition for the cover of Conan the Barbarian #150 was cropped out of the printed version, presumably either by editor Larry Hama or by editor-in-chief Jim Shooter. Maybe if Buscema hadn’t shown Conan chopping a guy through the throat with his sword, the editors would have published it uncut. Maybe.

The only issues of Conan that I have ever searched through dusty back-issue boxes to find and add to my collection were issues in which Barry Smith inked Barry Smith, John Buscema inked John Buscema or Gil Kane inked Gil Kane. The unpublished cover of Conan the Barbarian #150 looks like pure John Buscema to me.

Here’s a youtube video that includes footage of John Buscema pencilling and then inking a pin-up of Captain America along with footage of Bill Sienkiewicz creating a quick portrait Electra with marker, brush and ink, and white-out:

Here’s a relatively new addition to our collection of comic art; it’s page 4 of a 5-page story entitled “In the Swim,” with art by Samm Schwartz, which appeared in Archie’s Pal Jughead #103 (December 1963):

I posted the cover of Archie’s Pal Jughead #103 six days ago in a post entitled “Ebay Wins: Schwartz, Marek, Bacon,” at which time I wrote, “it’s not the oddly composed cover of Archie’s Pal Jughead #103 that caused me to buy it — nose meet pocket; pocket, nose — but the interior art. Can you guess why?” Well, the reason is that I think it’s always cool, when one owns a piece of original comic art, to own a copy of a comic in which the page was printed. Also, by having the comic at hand, I am able to post a decent scan of the printed page along with a digital photo of the art on this blog.

Along with the above page, my wife and I also own the original art of a complete story drawn by Samm Schwartz, “Color Me True Love,” Jughead #321 (February 1982), created about 19 years after “In the Swim,” but still clearly by the same hand, guided by the same minimalist artistic sensibility.