As usual, here’s the publisher’s description:

Even without artwork by Corben, the Dark Horse “library editions” of Hellboy are on my “must-have” list of comics publications. They’re GRRRRRREAT!

The Eisner-winning dynamic trio of writer Mike Mignola, penciller/inker Richard Corben, and colourist Dave Stewart reunites for an original 56-page hardcover Hellboy graphic novel (ISBN-10: 1-59582-757-9; ISBN-13: 978-1-59582-757-9), available in November from Dark Horse. “Devastated over the loss of his luchador comrade to vampires,” writes the publisher, “Hellboy lingers in Mexican bars until he’s invited to participate in the ultimate wrestling match with a vicious Frankenstein monster!” 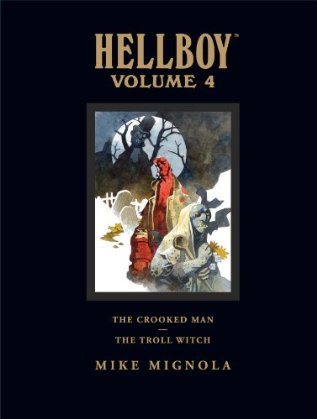 At last, the handsome, oversized “Hellboy Library Edition” hardcover series continues with Volume 4, which collects the following two trade-paperback collections of short stories: The Troll Witch and Other Stories, with scripts by Mike Mignola and art by Mignola, Richard Corben, and P. Craig Russell; and The Crooked Man and Others, with scripts by Mike Mignola and art by Richard Corben, Duncan Fegredo, Joshua Dysart, and Jason Shawn Alexander. The book will also include an extensive selection of previously unreleased sketches and designs. If you own any of the previous volumes, you’ll know that Mignola’s much-admired solo art looks absolutely gorgeous in the oversized format, and I expect that the work of Mignola’s hand-picked artist-collaborators will fare just as well, especially with multiple Eisner Award-winning Photoshop magician, Dave Stewart, handling the colours. A must have!

The Art of Coloring: Making Comics With Dave Stewart [Interview]

Just noticed that CBR news has a preview of the forthcoming collaboration between Mike Mignola and Richard Corben, entitled Hellboy: Double Feature of Evil. Mignola and Corben have worked together on several different Hellboy stories in the past few years — every one of which is worth adding to your bookshelf — so I think one can safely say that, at last, Corben has found a new regular collaborator (à la Jan Strnad) who is genuinely excited to work with him and fully capable of delivering compelling scripts that play to Corben’s strengths as an artist!

“Richard and I were talking about shorter stories,” Mignola explained to CBR. “Richard apparently likes drawing Hellboy, and my opinion is, as long as he wants to draw Hellboy, I will keep throwing stories to him.

“One of the things I said to him was, ‘Would you mind if I came up with a couple of shorter stories for you to do?’ Both of these were stories that had been knocking about in my head for a long time, and so Double Feature Of Evil was just us coming up with a name for a one-shot that would have two stories.”

“With Double Feature of Evil,” adds Hellboy editor Scott Allie, “there was some internal factor in Mike making him think about these stories more often, but the external factor is that Richard did such an excellent job on Crooked Man that we wanted to give him some more straight horror stories. A lot of Hellboy stories aren’t really horror stories. They’re monster stories or action adventure stories. Double Feature is a pair of horror stories that Richard can pull off just about better than anybody.”

Hellboy: Double Feature of Evil is scheduled for publication later this year.