Look at the bridle on Vokes’s version of Frazetta’s horse. Now you tell me: what’s missing from the design that renders it useless as a device one might use to control a real horse? (I see several problems with it.)

Of course, Frazetta’s Kubla Khan on horseback is itself little more than a variation on the longstanding Western theme of the weary Indian warrior on an exhausted horse, a.k.a. End of the Trail, which dates back to the 1915 sculpture by James Earle Fraser.

In the world of functional bit-bridles, the country bridle and the western split-ear are about as minimalist as it gets: 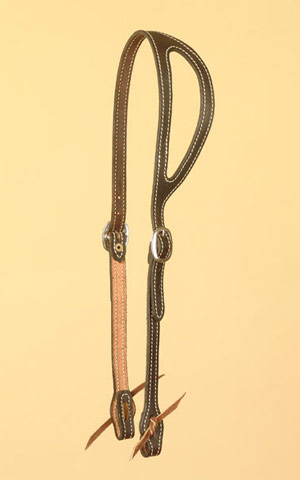 Notice that the crucial elements in both cases are 1) a strap that attaches to one side of the bit, runs up the cheek of the horse, over the head behind the ears, down the other cheek, and attaches to the other side of the bit, and 2) an ear or brow band to prevent the bridle from sliding either down the neck towards the rider or around the head in a circle, which would pull the bit out of the mouth and onto the cheek. Seeing what a minimalist bridle looks like makes it easy to see what’s wrong with Vokes’s version, which consists of a combination browband/throat latch and an entirely separate noseband, with no cheek pieces or headpiece at all.